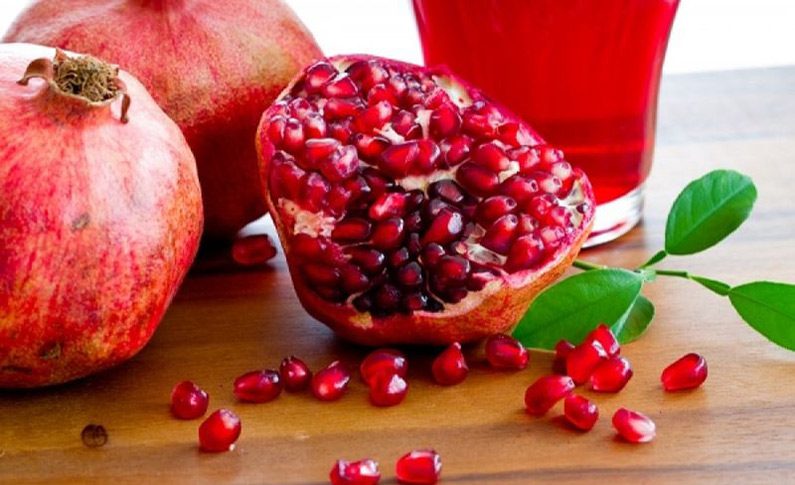 Every culture has its own unique, sometimes quirky, customs and traditions.  Greece is no exception and seems to have more than its fair share of Christmas and New Year celebrations,

Greek Father Christmas is not Saint Nicholas, but Saint Basil (or Vasilis), being Greek and true to form, he arrives late, a week late; on New Year’s Eve.

Christmas trees were introduced to Greece in the 1830s by King Otto, but didn’t really become popular until about the 1940s.

The Greek equivalent of the Christmas tree is the ‘karavaki’, or  Christmas boat, a wonderful tradition, which after falling out of favour, is making a comeback…

For the observant Orthodox Greek, the forty day fast, for Christmas, known as the advent fast, ends on Christmas day, with the breaking of ‘Christopsomo’, Christ’s bread, which was baked the day before, on Christmas Eve.

Children are up and about, bright and early on New Year’s Eve and go from house to house, singing the KALANDA, Greek Christmas Carols, usually only the one, same song,  accompanied by a triangle.

THE SKELETOURA, (Squill, sea onion), usually with the bulb part wrapped in foil.

The squill bulb or sea onion, used by Greeks in ancient times to worship Pan, God of the wilds and of nature, is hung above the door.  This onion, even when uprooted, will continue to grow layers and blossom; it’s said to have magical powers and is the symbol of rebirth.  This onion is kept in the house until the next New Year, to bring longevity, health, and luck.

A stone is collected from a beach, a river, a pond, basically anywhere there is water, taken home, and left outside the door or is to be put inside the house.   On entering the house for the first time, on New Year’s Day, you must step on the stone.  This brings luck and good fortune.

At the stroke of midnight, someone considered lucky, or a child, due to the fact they are pure and innocent, are sent outside and ordered to re-enter, right foot first, to bring good luck for the following year.   All windows are thrown open to let out the Kallikantzaroi, evil spirits, or mischievous Christmas goblins. 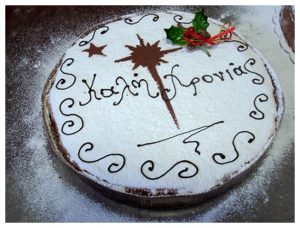 Every Greek family has its VASSILOPITA, the New Year’s cake, concealing a lucky coin.  After midnight, the Vassilopita is sliced and handed round by the head of the family.  A cross is scored over the surface, the first slice is for Jesus Christ, the second for The Virgin Mary, the third for Saint Vassilis, the fourth for the house and then, for each member of the family, starting with the oldest.  Whoever finds the lucky coin has good luck and good fortune for the rest of the year.

It wouldn’t be Christmas without traditional, Greek Christmas sweets,  something deliciously sweet and fattening!  The usual sweets are snowy kourabiethes, Greek Christmas cookies, filled with almonds and drenched in icing sugar.  Melomakarana,  sweet and soaked in honey, with a tang of spicy cloves.  Diples, thin strips of dough, folded and fried, sprinkled with chopped nuts and honey. And, of course, baklava, layers of phyllo pastry, filled with chopped nuts, covered in sweet syrup.

The Kallikantzaroi, is one such story, which has become a Greek Christmas tradition. Kallikantzaroi, plural (Kallikantzaros singular) are mischievous Greek goblins, elves or gnomes, that appear during the twelve days of Christmas, from the end of December until Epiphany, January sixth. These twelve days are also known as the winter solstice, and, in medieval times, yule or yuletide.

Kallikantzaroi are said to be small, black and male, mostly blind, with long black tails. They speak with a lisp and eat small creatures, such as, worms, snails and frogs. They only come out at night, and, are afraid of the sun, fire and holy water. The rest of the year, they live at the center of the Earth, where, they spend their time, chopping down The World Tree, or The Tree Of Life, that holds up the World, using a large saw.

At the beginning of the twelve days of Christmas, also the winter solstice, when the sun will not move again, until, sixth of January, Kallikantzaroi come up to the surface of the Earth, where, they cause all sorts of trouble and mischief.

Rather than being evil demons, they are considered impish and stupid. They come out of hiding at night, to enter houses; anyway they can, through windows, down chimneys, through keyholes, and any cracks that they may find, in walls and around doors. Once inside they cause havoc. In Greek folklore, the kallikantzaroi, disappear on the sixth of January, Epiphany, when Greek priests, go through all the houses, blessing them, with holy water, splashed around with a bunch of fresh basil.